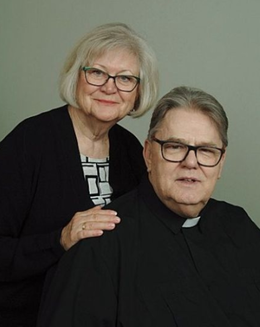 Mary and I live in Dimondale, a small village outside of Lansing with our Shih Tzu Nicodemus (Nico).  Mary and I are both on our second marriage and have been married for 28 years. We have a blended family with 5 children and 9 grandchildren, 8 of which live nearby and 1 who we visited when he was recently born in Denver, CO and fell in love immediately.

We had several rescue dogs over the years.  Plus, we had 24 Refugee Foster Children come through our home through what was then Lutheran Social Service of Michigan from locations around the world like Guatemala, Columbia, Morocco, Myanmar, Somalia, Yemen and Afghanistan.  Currently, we have a young man Kenny from Sierra Leone, who’s funding ran out as an asylee, that lives with us while going to Lansing Community College and working at The Home Depot.

I work full time in the Admin office of the Michigan Court of Appeals in the Hall of Justice, Lansing for 20 years and am nearing the end of my career.  I worked as Spiritual Care Coordinator for Hospice at the Community Health Center of Branch County along with the Behavioral Health Unit and Cancer Center until 2016, until working 7 days a week with three jobs and daily travel became too stressful.  Previously I was Owner of Ballard Marketing consulting with financial institutions statewide after ending my career as Vice President, Financial Services at Michigan National Corporation.  During my time at Michigan National I was the Branch Officer at Michigan National Bank-Valley, Green Acres Plaza, Saginaw and lived with my family in Saginaw Township.  I was also a Graduate Assistant at the Center for the Study of Contemporary Issues at Eastern Michigan University.

I graduated from Eastern Michigan University with a Bachelors in Psycholgy and attended Graduate School in Psychology.  My other education involved was the Lay Missionary Program and Synodically Authorized Minister Program at the Synod and Graduated from Wartburg Theological Seminary, Dubuque, IA.

Within a volunteer church setting I worked with the Synod as a Mission Partner Coordinator, was on  the Board of Governors Lay Ministry Training and Synodically Authorized Training Program, was on the Outreach Committee and Witness Evangelism Committee.  At church level I served as Sunday School teacher and Superintendent, was Chair of the Stewardship and the Outreach Committee, Facilitator Separated and Divorced Group Leader, Singles Ministry Coordinator and Visitation Team.

My ministry experience as a Synodically Authorized Minister and an ordained Minister in my home congregation in Grand Ledge was that of serving Reformation Lutheran Church Coldwater and Hope Community Church Rockford.

Mary and I have been so richly blessed and look forward to continue to use our gifts to serve Christ to follow the mantra:  God’s Work.  Our Hands.

Saginaw, MI
You've still got it and we're happy to be a part of downtown Saginaw.

In the City for Good!

Click to watch a 12 minute video, well worth the watch. 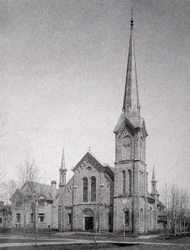 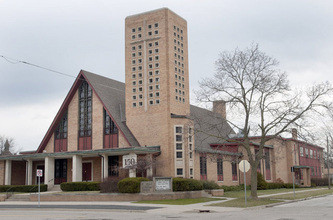 SAGINAW, MI -- Tucked in a little chapel downstairs at St. John Lutheran Church is a piece of history:  the original altar, stained glass windows and a towering statue of a loving Jesus from the church built in 1869.

“It was a beautiful church,” said Marie Wells, who attended St. John’s day school when she was a child. “We got a very good education. Edward Lauckner offered to teach us algebra in the eighth grade, so we’d catch up with the public school kids, but heck, we were way ahead of them.

But parishioners returning Sunday, April 21, for a homecoming feast at the church founded in 1852 by German immigrants will realize that even as it celebrates its 160th anniversary, St. John Lutheran has its sights firmly set on the future.

The April 21 festivities begin with a worship service at 9:30 a.m., honoring members of 50 years or more, and continue with a potluck meal at the church at 915 Federal.

“I’m 61, and I’ve gone there my whole life,” said Marcy Andersen, who will soon take over Wells’ duties as chair of evangelism. “My father, Arnold Schoen, went there all of his life, and his parents, William and Wilhelmina Schoen, were members, too.

“This is my church family. When my husband Wayne and I lost our daughter in a car crash, they were there for us, and when my brother and sister died and, most recently, when we lost my mother, Bernice.”

As the church transitioned into caring for others in the community, “we were there to help, too,” Andersen said. “We’re small, but we still do big things. I’m proud to be a member of St. John’s congregation.”

Just as the Andersens remained in Saginaw, St. John Lutheran decided to stay “in Saginaw for good,” said the Rev. Mike Kemper, serving as an interim pastor while the congregation finds clergy willing to take on the church’s extensive outreach program.

“Even with a dwindling congregation, we’ve kept a positive attitude,” Wells said. “St. John was built here for a reason.”

In 1852, ministered by Friedrich Schmid, an itinerant pastor establishing new congregations throughout Michigan, “it attended to the spiritual needs of the German immigrants,” Kemper said. “In the early 20th century, it met the needs of its members. Then came the white flight, and the church turned its attention to ministering to the surrounding neighborhoods.”

With the help of other ELCA churches in Saginaw, it operates the Saginaw Metro Ministries Food Pantry, open on the second and fourth Thursday of every month. On the fourth Saturday of each month, the church serves a breakfast for the hungry.

Huge rooms standing empty now house KinderKare and Head Start programs. Lutheran Social Services has offices there, and Trinity Lutheran, after closing its popular neighborhood center, has established Carl Bjork III at St. John as it figures out its own future.

“They’re looking for ways to expand their outreach,” Kemper said, adding that St. John is also trying to expand and build on its ministerial outreach.

Again this summer, he added, it will offer its eight-week summer camp for children in first through eighth grades. In past years, they’ve had as many as 100 children show up for a day that includes breakfast and lunch, a refresher course on math and English and a Bible story, along with field trips and other summer activities.

“We need to attract new people interested in outreach,” Wells said, echoing a call for action on the church’s website, stjohnlutheranelcasaginaw.weebly.com.

“This is a wonderful, loving congregation filled with friendly, dedicated people. But we need help as we expand our mission.”

SAGINAW, MI — As St. John Lutheran Church closes its 160th anniversary year with a homecoming service and potluck dinner at 9:30 a.m. Sunday, April 21, we offer a look at its sanctuaries through the years.

A full history of the church's early years assembled in 1902 was translated from its original German in 2002 and released again on the church’s 150th anniversary.

1852 – When several members of St. Paul Lutheran Church on Saginaw’s West Side tired of crossing the river for church services, they established St. John Evangelical Lutheran Church, meeting at Hoyt School and then at Haengsdoerfer Hall above a hotel on what was then Water Street.

Today's members believe it was the first church established on Saginaw's East Side, then still sparsely inhabited marshland.

1868 – The cornerstone was laid for the brick church that stood through the 1950s. The congregation had a problem raising the $22,000 construction cost, but each time it looked as if work would have to halt, they'd again find the necessary funds. Everyone breathed a sigh of relief when the church was dedicated in 1869.

1878 – The original church, by this time used as a school, was removed to make room for the new school, a towering structure that stood near the church. It was constructed for $3,100.

1959 – Both buildings were demolished, and the church that still stands today was built on the grounds at Federal and Second. The altar, pulpit, stained glass windows and other furnishings were preserved from the old church and are now used in the Volz Memorial Chapel, named after an early pastor.